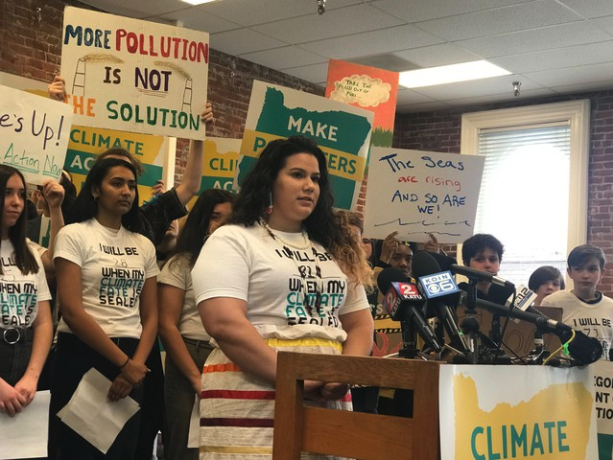 UNITY Earth Ambassador, and President of the Siletz Tribal Youth Council Jeidah DeZurney, 21, spoke at a youth climate action rally Feb. 6, 2020 in Portland. She called on leaders to act now and create climate policy that will mitigate greenhouse gas emissions. “My people have self-sustained by traditional foods our entire history. It hasn’t been until recently that we have had such a decline of salmon in our rivers,” said Earth Ambassador DeZurney, president of the Siletz Tribal Youth Council. “The causes can be directly linked to climate change and pollution in our Siletz River. Our traditional way of life and culture is in danger.” by Monica Samayoa OPB

Youth from around the state declared at a Portland rally Thursday that Oregon is in the midst of a climate emergency. They called on government leaders to take action now and create policies that address climate change.

This comes as state legislators gather in Salem to consider a proposal aimed at reducing and regulating greenhouse gas emissions.

Last June, Oregon Senate Republicans walked out and prevented a vote that would have put a cap on carbon emissions and charged polluters for their greenhouse gas emissions. A similar bill has been put forth this short session.

Nearly three dozen youth and environmental activists gathered in the latest in a series of Portland rallies over the past year to say enough is enough. Students from around the state took turns addressing the gathering and sharing their concerns about climate change and how it is affecting their communities. Several also described their ideas for curbing greenhouse gas emissions.

One of the event’s big themes: that the time to act is now.

DeZurney, 21, is a student at Willamette University. She called on government leaders for a transition from carbon-emitting energy like coal and natural gas to carbon-free energy. The burning of carbon-based fuel is the biggest contribution humans are making to climate change.

DeZurney said that could be done by building energy efficient homes and buildings, creating well-paying jobs for people who work in construction, engineering, and electricity. DeZurney also criticized polluting industries by saying they stop progress by instilling fear into the public who want to take climate action. She said the pollution industries tell the public they will lose their jobs or say renewable energy costs too much money.

“The only opportunities for a lot of people growing up where I did is to work in logging or farming, yet those jobs are becoming harder to depend on. Both because of global economic pressures and also the climate crisis,” DeZurney said. “If we continue seeing warming, drought and wildfires get worse and worse, families won’t be able to survive on this.”

Another youth activist, 17-year-old Rhylie Woodley from Grant High School in Portland, reminded government leaders that many students who will face the challenges of climate change in the future are of age to vote or getting closer.

“There are thousands of us ready to vote for the first time in Oregon and across the country and one of the biggest issues on our minds is stopping the climate crisis,” Woodley said. “I’m frustrated because I’m just now getting a seat at the table. The science showing global warming is caused by burning fossil fuels has been known for more than 30 years, over twice my lifetime.”

Woodley said we can see the effects of climate change in Oregon in the wildfires that have caused poor air quality throughout the state and the rising ocean temperatures that have killed thousands of salmon every year, causing a decline in their populations and affecting ecosystems.

“This is not just a faraway problem; this is a community problem. This is our home I’m talking about,” Woodley said. “… more and more of us are progressing into adulthood and be forewarned we will not sit idly.”

Youth activists wore -shirts at a rally held Feb. 6, 2020 in Portland. They were designed so wearers could indicated their age in 2030. The year is significant because a U.N. report has outlined actions necessary by then to keep global temperatures from exceeding a goal in the Paris climate agreement.

Youth student activists who attended the rally in downtown Portland wore T-shirts that indicated what age they will be in ten years, which is when scientists have claimed is the final tipping point to reverse the effects of climate change.

“I raise my voice because I can’t vote for three more years and time is running out. Scientists gave us ten years to make significant changes to reduce climate pollution,” Newport High School student Maia Stout, 15, said. “An Oregon student in second grade today will just be graduating high school when their climate fate is sealed.”

Angelique Prater is a student from South Salem High School and is part of the Latino Unidos Siempre organization, which is a grassroots political organizing group in the Latino community.

“Now is the time to implement climate policy. Our legislators have had more than enough time to think about the potential impacts of climate policy like clean energy jobs, some members even running away and hiding out of state,” Prater said. “While many of them will sit in their offices and never experience the frontline impacts of climate change, many of us will.”

She said her parents both work jobs where they both experience the consequences of climate change, like exposure to increasingly hot, direct sun.

Youth and student climate activists will hold another rally Feb. 11 in Salem.