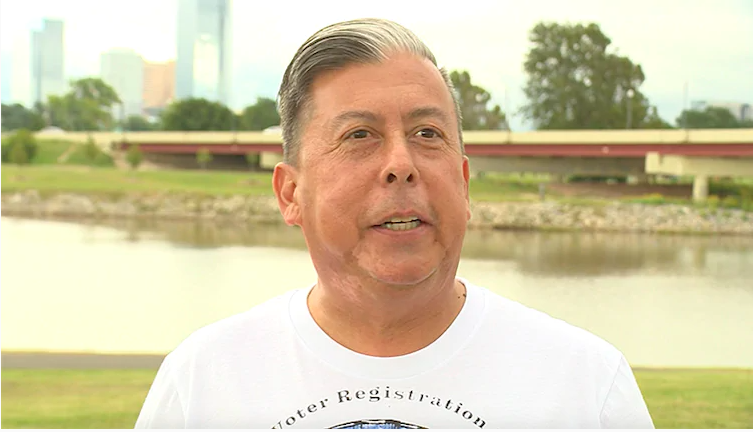 One night back in 2002, an Oklahoma legislator named Cindy Hughes came to speak to a group of young adults in the Indian Methodist Church. Hughes, a member of the Kiowa Tribe, which has many members in the southwestern part of the state, told a devastating story during the gathering.

She explained that she met with other legislators, explained the needs of her constituents and eventually asked her colleagues to come out and meet with some of the Kiowa people. She hoped they would make a pitch for her peoples’ vote. She was shut down and told that a trip down to see the Kiowas wasn’t necessary, because Native Americans in Oklahoma didn’t vote in high numbers.

One of the people in that audience that night was Rev. Dr. David Wilson, who is now a pastor and an administrator for 81 Indian Methodist churches throughout Oklahoma, Kansas and Texas, and also the Director for Rock the Native Vote in Oklahoma. The message contained inside Hughes’ story bothered him and a handful of others at the meeting so much that it inspired the beginnings of a new organization.

Rock the Native Vote started in 2004. The message contained within Hughes’ story struck a nerve with Wilson, a member of the Choctaw Nation. Instinct told him he must help the Native American population in Oklahoma with civil engagement. For the Native American community, Wilson explained, there’s a long history with the United States government that has caused distrust. Many in his circles wonder what political matters have to do with their lives and their people.

“We hear this in all communities, but people say, ‘What does my one vote mean? Does it really count?’” Wilson said. “We remind folks of the importance of every single vote.”

“We’re always educating people that although we have our own tribal nations and so forth, we’re still a part of the greater community and Oklahoma City,” Wilson continued.

On Tuesday, Wilson was at Wheeler District, just across the Oklahoma River from downtown Oklahoma City. With the Ferris Wheel slowly spinning in the background, Wilson watched as volunteers helped people register to vote, some for the very first time. While it is easy to be jaded and think about one vote as a drop in the bucket, Wilson and Rock the Native Vote remind citizens that both national and local political decisions are critical to his community.

Before the COVID-19 pandemic, Wilson and the Rock the Native Vote staff were out at every event they could find, from Pow Wows to festivals to Indian taco sales. The summer, particularly in an election year, is when his crew is usually most active. Physical distancing and cancelled events forced most of their efforts to go online for a while, but over the last six weeks there have been about a dozen outdoor events that have helped re-energize the voter registration efforts.

To Wilson, the 16 years of work with Rock the Native Vote has made a difference, but it can only go as far as citizens are willing to take it. Getting registered to vote is half the battle. The other half is either utilizing absentee ballots or actually showing up on election day. Wilson, who was born in the tiny town of Okay, Oklahoma (pop. 650) and grew up in Muskogee, has tried to heighten the importance of voting for Native Americans in his state. Through Rock the Native Vote, he gives people an avenue to make their voices heard. Now, it’s up to them to use it.

“If we don’t speak out through voting, we tell people, ‘you don’t deserve a right to complain about what happens’,” Wilson said.