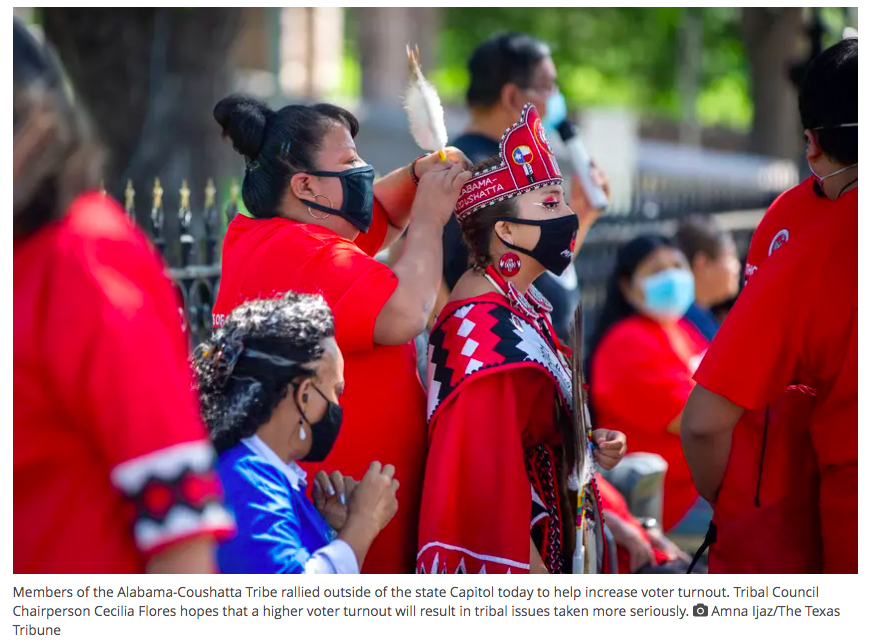 The Texas Tribune BY TRINADY JOSLIN SEPT. 25, 2020 – Native American tribe members say mistrust of the government and a history of erasure of indigenous people contribute to a lack of voter participation.

Cecelia Flores knows that voting turnout among her fellow Alabama-Coushatta Tribe members in East Texas has traditionally been low.

The chairperson for the federally recognized tribe said most people in her community don’t see how the federal government impacts what they prioritize most: work and livelihood.

Then, an electronic bingo facility run by the tribe, which employs over 700 locals, was threatened with being forced to close when conflicting federal laws raised questions about whether the game could be offered there. The U.S. House of Representatives passed a bill to protect the facility in July 2019, but the legislation was opposed by U.S. Sen. John Cornyn, a Texas Republican who is up for reelection in November.

“This matter is currently the subject of litigation in federal court,” Cornyn wrote last October. “In light of these legal and policy disagreements between the Texas state government and these tribes, I request any committee hearings concerning this legislation be postponed until these parties have reached a resolution or agreement.”

Now, Flores said she and other members of the Tribal Council are hoping to increase tribe members’ voter participation in hopes that Texans in Congress take the tribe’s issues more seriously — and support legislation they need.

“We’re doing a lot more voter education and letting people know that they do have a voice and that these issues that are out there on the table now,” said Flores, who is also a U.S. Air Force veteran. “We can have some influence if we have a voice in our voting and who our representatives are in Congress and at the state level.”

Nationally, voter turnout rate among Native American and Alaska Native voters is lower than other racial and ethnic groups by 1 to 10 percentage points. According to the 2010 Census, there were 315,000 people who identified as American Indians or Alaska Natives in Texas.

Karla Aguilar, the developmental director for the group, said they hope to increase voter turnout among the 30,000 Native Americans she said live in Bexar County.

On Tuesday, the group held a get-out-the-vote parade in the area and while Aguilar said she spoke to many who were excited to vote, she still worries about the community following through on Election Day.

One barrier, she said, is lack of education on the subject.

Overall mistrust of the government and a history of erasure of indigenous people also contribute to the lack of participation, Aguilar said. Through events like the parade, Aguilar said the group hopes to make the democratic process more visible to Native Americans.

“We’re talking specifically to the heart of our Native American community, to remind them that democracy is indigenous, and that it only works when we participate and that’s the core message that we’re getting across,” Aguilar said.

Aguilar said the group hopes to not only increase visibility on issues like the lack of a Texas Indian commission and climate change, but also create conversations centered around Native Americans.

“The issues that are of interest to the vast majority of our community are the same as everybody else: education, health care, employment, housing … and food security,” Aguilar said. “It’s all the same, but the way that we don’t see conversations specific to Native Americans about these issues, because our approach is culturally different.”