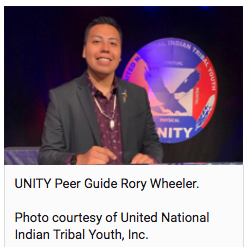 United National Indian Tribal Youth, Inc. (UNITY) held four virtual town hall meetings in collaboration with OJJDP to gather feedback from more than 430 youth on juvenile justice issues in Indian country. UNITY promotes positive youth development, citizenship, and leadership among American Indian and Alaska Native youth. The sessions offered a unique opportunity for tribal youth to talk about how they deal with trauma and provide recommendations for UNITY and OJJDP to enhance their engagement with youth and bolster their resilience.

“We wanted to offer them space to have meaningful conversations about these topics which really aren’t talked about in Indian country,” said LorenAshley Buford, a program manager for UNITY. There is a “huge data gap” on the problems tribal youth experience, she said. More than three-quarters of participants at the 2019 National UNITY Conference said they, a family member, or a friend had been directly impacted by the child welfare or juvenile justice system.

The town hall events were held as part of the OJJDP-supported Healing Indigenous Lives Initiative, an effort begun in 2018 to increase youth engagement on public safety issues, with a focus on juvenile justice and delinquency prevention. They were led by a diverse group of young adult mentors recruited by UNITY—called peer guides—who serve as an advisory committee for the initiative, and develop and conduct its trainings aimed at tribal youth.

UNITY will release its findings from the town halls through a variety of formats this spring, including a video. In May, the organization plans to host a series of webinars to discuss the peer guides’ findings. It also will publish a final report.

Much of the discussion involved questions asking how OJJDP could bolster or expand its support for delinquency programs. Participants’ responses highlighted a need to emphasize healing over punishment and to incorporate cultural practices as part of rehabilitation. Those values should be closely integrated into OJJDP programs that are designed to ensure juvenile offenders are held appropriately accountable, participants said.

“It isn’t about who is wrong or making someone pay for what has been done,” said a youth from the Mountain region. “In Navajo Peacekeeping Courts, they focus more on restoration rather than making juvenile offenders pay for a mistake. It’s about restoring the relationship between victims, offenders, and the community.”

The conversation also revealed the participants’ conflicted feelings toward the police. According to the peer guides, one strategy for enhancing community safety would be for youth to build trust and a closer relationship with local law enforcement. Other comments underscored the important role elders play in tribal households.

The 2021 Tribal Youth Virtual Conference included a closing presentation about the town halls by the peer guides.

Ms. Buford said the information gleaned from the town halls should provide OJJDP and policymakers a glimpse into how Native youth see their lives, along with input on how the Office’s programs could be improved. “We hope to make a real change,” she said.

Additional information about the Office’s tribal youth initiatives, funding, and training and technical assistance can be found on its Tribal Youth Programs and Services webpage.