A University of Arizona student turned a spark into a calling and became more than she imagined.
By Mikayla Mace Kelley, University Communications

UNITY Earth Ambassador Nadira Mitchell knows she’s on the right track. From collecting snails as a kid, to participating in science fairs as a teen, to now doing community outreach in college, she is well on her way to fulfilling her dream. 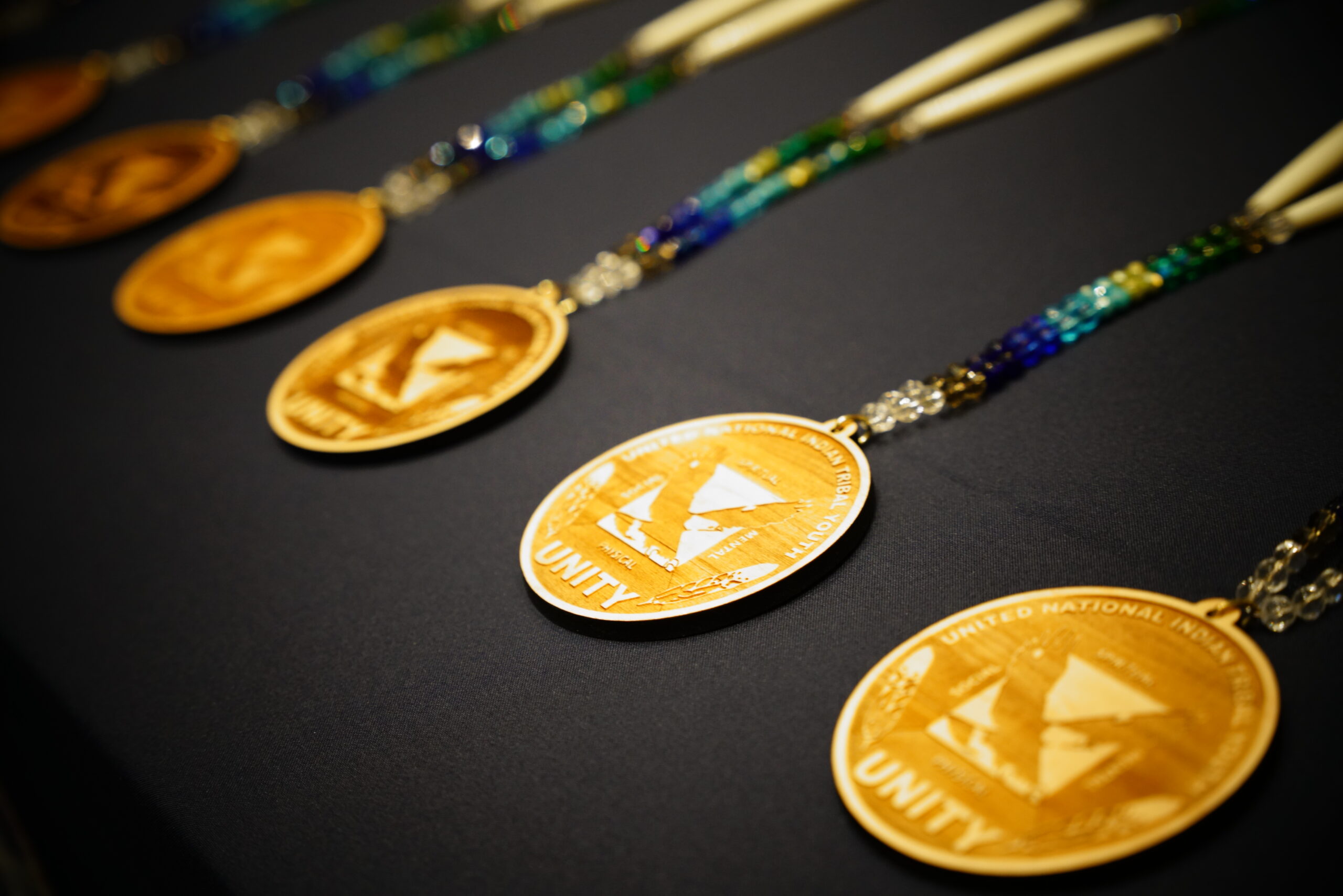 Mitchell, a University of Arizona junior in the School of Natural Resources and the Environment in the College of Agriculture and Life Sciences, hopes to become a tribal liaison for wildlife conservation and management. She’s interested in working for Arizona Game and Fish, the U.S. Fish and Wildlife Service and the Navajo Nation.

She is one of 55 students in the U.S. – and four at UArizona – awarded Udall Scholarships over the summer. The scholarship is awarded to college sophomores and juniors for leadership, public service and commitment to issues related to Native American nations or the environment. It honors the legacies of politicians Morris Udall and Stewart Udall, whose careers supported Native American self-governance, health care and the stewardship of public lands and natural resources.

“Older Native peers were telling me to apply for the Udall Scholarship even before college,” said Mitchell, who is Navajo. “It seems like it just manifested itself. I knew this is pretty much a perfect fit for me and my goals.”

Mitchell was also a 2020 recipient of the Roe B. Lewis Scholarship, which aims to increase the awareness of the importance of Native American agriculture and natural resources and assist Native American college students with their educational expenses. And she was awarded a Doris Duke Conservation Scholarship, which provides first-year students and sophomores who are interested in environmental issues and cultural diversity with training, support, mentorship and funding for paid research experiences and internships. 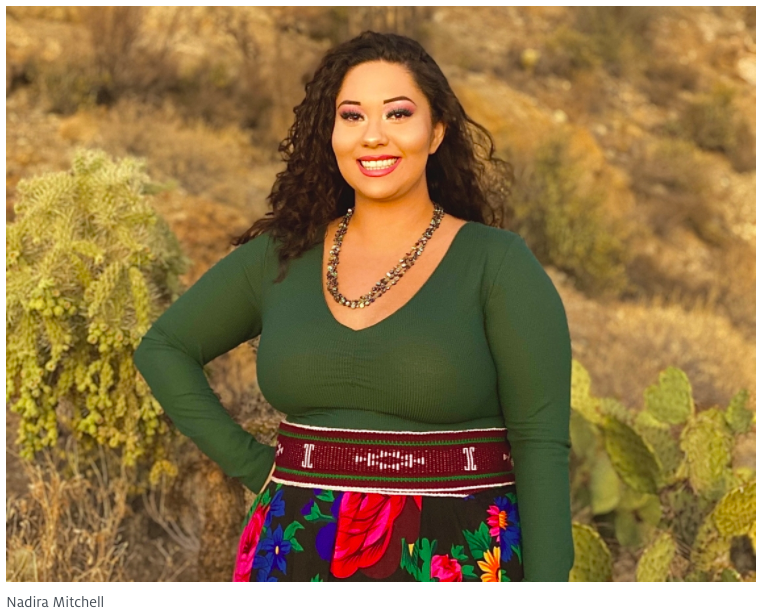 An Early Connection to Nature

From a young age, Mitchell’s mom encouraged her to explore nature and taught her about her Navajo culture. As a Tucson-born girl, Mitchell fell in love with the diversity of life in the Sonoran Desert. She was especially fascinated with the animals that would spring up after monsoon rains. She fondly remembers collecting snails; as she crawled and dug around her yard, she would tally how many she found.

“My Navajo culture inspired me to respect and protect animals. For example, if you kill ants, that’s not healthy for you, my mom always said. I wanted to protect them and be a steward for all wildlife,” Mitchell said. “Running around and tallying snails was kind of my first experience with science. I realized early that I didn’t want to be a vet or a biologist. I wanted to pursue the conservation aspect of work to protect wildlife habitats and whole ecosystems.”

Now, she is majoring in natural resources at UArizona.

Reaching Out to Native Communities

Mitchell’s mom, Agnes Attakai, serves as the director of health disparities outreach and prevention education in the Mel and Enid Zuckerman College of Public Health. Her outreach work often took Mitchell to the Navajo Nation.

“My mom would drop me off with family while she spoke with community members, so it still feels like home,” Mitchell said.

Like her mom, Mitchell is also interested in education and outreach. She is one of the founding officers of the university’s American Indian Student Initiatives club, formed in 2019. The club aims to help reduce environmental injustices in Native American communities by raising public awareness and organizing direct actions.

“There is already a Students for Sustainability club on campus, but we wanted a club that was specifically focused on the needs of Native American communities and taking direct action,” she said.

The club collaborated with GRID Alternatives – an organization that works to make renewable energy technology and job training accessible to underserved communities – to install solar panels for a Navajo family without electricity just before the pandemic lockdowns began.

Once the pandemic hit, the club couldn’t do in-person work anymore and had to pivot. Over the last year, the group has organized virtual education events on topics such as environmental justice, the impact of COVID-19 on Native communities, border issues and more. The club also has several social media followers, especially on Instagram, that are not from Arizona. Mitchell’s goal is to provide insight and education for them, as well.

“It wasn’t necessarily a goal of ours to have virtual events, but it just happened because of the pandemic,” Mitchell said. “I was pretty proud that we’ve done four events on important issues. We didn’t stay stagnant.”

In spring 2020, the club also held a donation drive for the Tohono O’odham Nation’s Baboquivari United School District southwest of Tucson. Grants from the University of Arizona Green Fund and donations to the drive allowed the club to buy hygiene supplies for students and temperature readers to screen for COVID-19 on school buses.

Mitchell has known she was on the right path since high school.

For one project, she planted wildlife cameras in Sabino Canyon to compare the use of manmade trails versus natural corridors by wildlife.

Her passion for science fairs, and the networking she did at them, led to her serving as a SARSEF ambassador. She represented the foundation at different events to share information about what the organization does. This eventually led to an opportunity to serve on the SARSEF board of directors.

“SARSEF was really encouraging to me because I got the opportunity to have a platform to talk about something I’m passionate about,” she said. “You can’t necessarily do that in a classroom, and you can’t learn everything in a classroom; you just have to get out there and explore sometimes.”

Mitchell says she often thinks about how it will feel to someday have the career she’s always dreamed of.

“I feel like everyone thinks about that in college and while growing up in general,” she said. “But, personally, I feel like I need to take the time to think about where I am right now.”

And where she is right now is more than she could have ever imagined, she said.