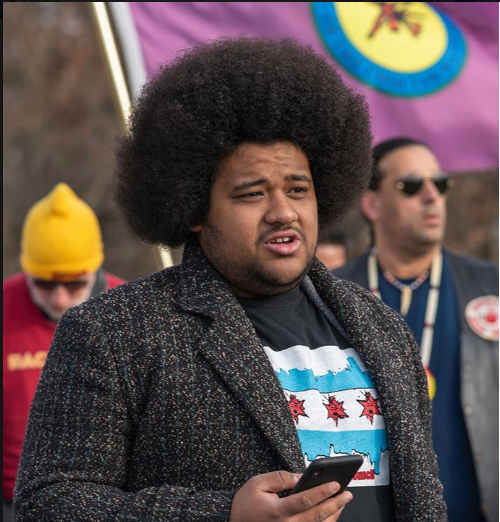 National UNITY Council’s Midwest Representative Anthony Tamez-Pochel was featured in the following USA TODAY article addressing the false narratives of Columbus Day.  “For many Americans, the second Monday in October is a celebration of Italian heritage and Christopher Columbus’s 1492 voyage to the Americas. But a growing number of cities, states and universities are abandoning ship and replacing Columbus Day with Indigenous Peoples Day, also known as Native Americans Day.”  Read the  entire original article here by Grace Hauck USA TODAY

At least eight states, 10 universities and more than 130 cities across 34 states now observe Indigenous Peoples Day as an alternative to the federally recognized Columbus Day, which they say glorifies the mistreatment and colonization of Native Americans.

Although Italian explorer Christopher Columbus is often credited as being the “discoverer” of the New World, millions of people already inhabited the Americas, and the Vikings had reached North America nearly five centuries earlier. Columbus made four expeditions to the Caribbean and South America over two decades, enslaving and decimating local populations and opening the floodgates of European colonization.

“Through this executive order, we recognize and appreciate our tribal nations and Indigenous people and their resilience, wisdom, and the contributions they make to our state,” Gov. Tony Evers said in a press release. “Native Americans in Wisconsin and throughout our country have suffered unjust treatment — often at the hands of our government — and today is about recognizing that Wisconsin would not be all that it is without Indigenous people.”

On Thursday, Washington, D.C., voted to temporarily change the name of Columbus Day to Indigenous Peoples Day. If approved by the mayor, the act would go into effect immediately.

Maine and New Mexico changed the name in April, and Vermont followed suit in May. Minnesota made the change in 2016, followed by Alaska in 2017 and North Carolina in 2018. South Dakota has been celebrating Native Americans Day since 1990.

“This isn’t a way to erase our history or erase what was done because we want to make sure what happened is taught. But the United States has a history of celebrating people that shouldn’t be celebrated. We shouldn’t celebrate people that have committed genocide,” said Chicago organizer Anthony Tamez-Pochel.

Tamez-Pochel, who is Cree, Lakota, and black, serves as co-president of the Chi-Nations Youth Council, an organization that supports indigenous youth. Tamez-Pochel has been leading the charge to change the name of Columbus Day in Chicago. To draft the pending city ordinance, Tamez-Pochel and others worked with Indigenous youth and Caribbean communities that had been directly impacted by Columbus.

Get the The Backstory newsletter in your inbox.

“For us to celebrate a man who’s done these horrible atrocities against indigenous people, to me, it’s a slap in the face. I understand where the Italian-American community is coming from, it gives them a chance to celebrate their heritage, but at the expense of another’s culture,” Tamez-Pochel said. “It’s wrong to spread false narratives of what actually happened. We have to start telling the truth, even in our schools.”

But not everyone’s on board. In May, a northern New Jersey town shut down a proposal to change the name. Many Italian-American heritage groups opposed the change, saying it was motivated by “propaganda.”

In April, Oklahoma, which is home to 39 recognized tribes, struck a compromise: Republican Gov. Kevin Stitt, the only current governor in the U.S. enrolled as a member of a Native American tribe, signed a bill placing both holidays on the same day.

“It just gives us one opportunity to celebrate Columbus, but also the Indigenous people here in America,” Stitt told the Associated Press at the time.

In Hawaii, the same day is known as Discoverers’ Day, in recognition of the Polynesian discoverers of the Hawaiian Islands.

Columbus Day celebrations date back to 1792, when New York City celebrated the 300th anniversary of Columbus’s landfall. It official became one of now 10 official federal holidays in the 1930s, but local municipalities and states have not always observed it. Even Columbus, Ohio, named for the explorer, did not observe the holiday last year, citing a lack of funding to give city employees both Veterans Day and Columbus Day off.

Only 21 states, plus American Samoa and Puerto Rico, actually give workers Columbus Day as a paid holiday, according to the Pew Research Center’s review of state government data.

The notion of an Indigenous Peoples Day took root at an international conference on discrimination sponsored by the United Nations in 1977. In 1992, Berkeley, California, declared Oct. 12 as “Day of Solidarity with Indigenous People” and promoted programs in schools and museums on Native American culture.

But the trend to replace Columbus Day really gained traction in 2014, when cities such as Seattle and Minneapolis adopted resolutions replacing the holiday. In the next few years, resolutions across the country took flight in dozens of places. Universities across the country—including Brown, Cornell, Drake, Syracuse, Minnesota State and more—have also joined the movement.

The 75th annual Columbus Day parade is scheduled to take place in Manhattan on Monday. The event celebrates the “spirit of exploration, the struggles and triumphs of immigrants who helped build the United States, and the vibrant heritage and cultural wealth of the Italian-American community,” according to the non-profit Columbus Citizens Foundation website.

The Foundation did not respond to requests for comment.

Tamez-Pochel said he would be spending the holiday at a ribbon-cutting ceremony and celebration for a newly-built earthen mound along the Chicago River, an installation that pays homage to the ancestral practice of mound building.

According to the Northwest Portage Walking Museum, which spearheaded the project, the serpent-shaped earthwork will be the first noted installation of an hybrid earthwork mound by an Indigenous artist in North America, since the founding of the United States.