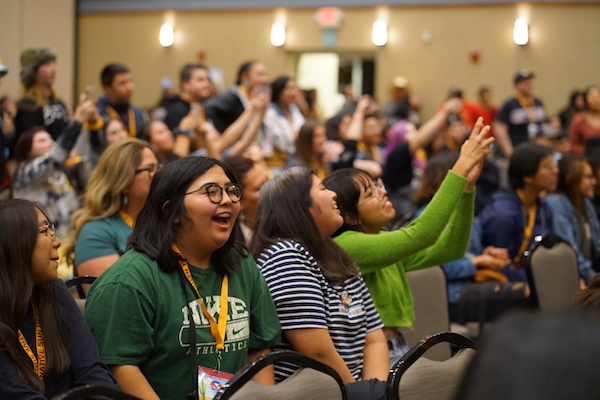 The 2020 UNITY Midyear Conference, held February 14-17 in Tempe, Arizona, brought together more than 450 Native American and Alaska Native youth and advisors from rural and urban tribal communities across the U.S. for four days of learning, cultural sharing, and collaboration. The focus of this year’s conference was on healing, and strengthening Native youth identity and sense of belonging. Importantly, UNITY affiliated youth councils and individuals left the conference with completed action plans for community service projects.

The conference opened with a presentation by Gila Crossing Community School Color Guard, and a cultural presentation and blessing by Phoenix Indian Center’s F.I.N.A.L Youth Council. A special welcome was given by Gila River Indian Community’s Governor Stephen R. Lewis. In addition, UNITY’s Peer Guide Leaders challenged attendees on the first day to discuss Native youth incarceration and to submit their feedback via texting.

“We want Native youth to feel empowered and confident in their ability to affect positive change,” said Mary Kim Titla, UNITY Executive Director. “I am proud that UNITY continues to help our youth develop leadership skills, and enables them to learn from and be inspired by others who have made positive impacts on their communities and the world at large.”

At the Native Youth Activism Panel, attendees heard from young people who have raised awareness about important issues impacting Native communities. TaNeel Filesteel (Aaniih, Nakoda and Apsaalooke) is a senior at Salish Kootenai College, and is leading initiatives on Get Out the Vote for the 2020 presidential election. She recently delivered a TedX Talk titled Lessons from a Tribal Prosecutor, weaving poetry and storytelling into her presentation of healing. Rosalie Fish (Cowlitz) is an 18-year-old medal-winning competitive runner who has used her platform to raise awareness for missing and murdered Indigenous women. National UNITY Council’s Executive Committee Representative Anthony Tamez-Pochel (Cree and Lakota) serves his community in Chicago, working on land-based education, helping community members plant medicine gardens to maintain connection to the land, and working as an aldermanic aide for the City of Chicago, focusing on local businesses and youth projects. Last year, he drafted and submitted an ordinance calling for the abolition of Columbus Day and establishing Indigenous Peoples Day.

Additional conference highlights included a behind the scenes discussion of the Netflix series “Basketball or Nothing,” with Shaun Martin (Navajo), Chinle High School athletic director; and Chance Harvey, a member of the 2018-2019 basketball team featured in the series. In addition, UNITY’s Earth Ambassadors challenged youth to participate in UNITY Earth Day on April 22nd, a 50th anniversary event.