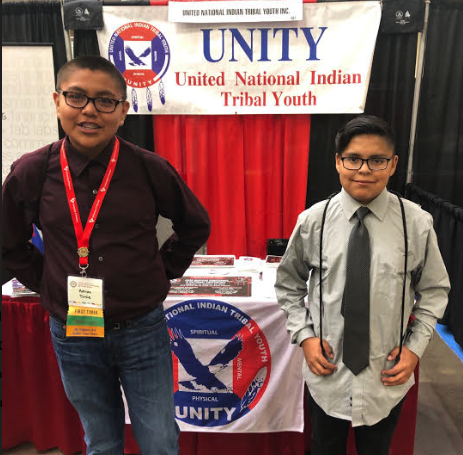 “Have you heard about UNITY?” If you attended the National Indian Education Association (NIEA) Convention last month in Minneapolis, Minnesota, you most likely heard that question as you passed by the UNITY booth inside the convention center’s exhibit hall. Promoting and marketing UNITY youth programs is a top priority according to Executive Director Mary Kim Titla, San Carlos Apache. “One of the best ways to promote UNITY is to do it in person. By hosting a booth, we’re able to talk about the impact UNITY has had in our personal lives and directly hand people a brochure about the organization,” she said. Titla and UNITY alumni/volunteer John Mosley, Assiniboine/Paiute, estimate handing out hundreds of UNITY brochures and pamphlets at NIEA. 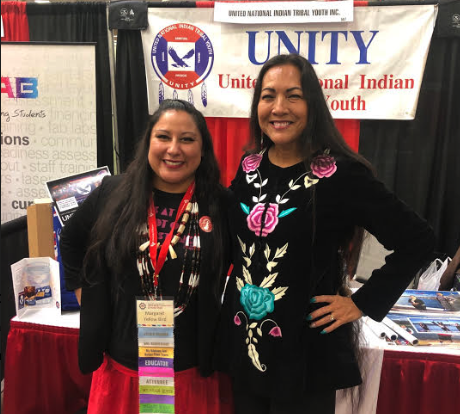 “The face-to-face interactions are so valuable. I’ve had the pleasure of introducing UNITY to so many adults and young people who’ve never heard about it. We also interact with UNITY alumni, who immediately reminisce about their unique and special experiences,” Titla added. UNITY participates in a variety of convention trade shows every year sponsored by NIEA, the National Congress of American Indians, the American Indian Science and Engineering Society, Arizona State University (Recharge), Society of American Indian Government Employees, United South and Eastern Tribes and others. If you see a UNITY booth at an event, stop by and say hi!