This report examines suicide clusters within American Indian and Alaska Native communities. It discusses effective prevention strategies and offers resources to communities to decrease the prevalence of these clusters. A suicide cluster may be defined as a group of suicides or suicide attempts, or both, that occur closer together in time and space than would normally be expected in a given community. 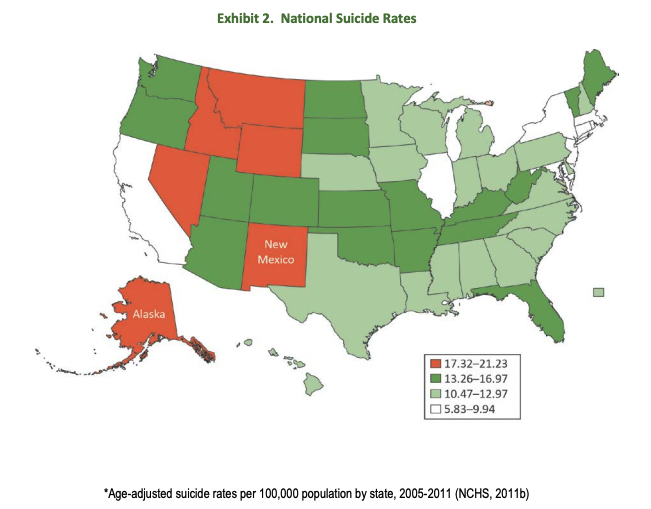 Suicide Clusters and Contagion A suicide cluster can be defined as “a group of suicides or suicide attempts, or both, that occur closer together in time and space than would normally be expected on the basis of statistical prediction or community expectation” (CDC, 1988; Gould, Jamieson & Romer, 2003). There are two main types of suicide clusters: point and mass (Haw, Hawton, Niedzwiedz, & Platt, 2013; Joiner, 1999; Rezaeian, 2012). Point clusters are close in both location and time, occur in small communities, and involve an increase in suicides above a baseline rate observed in the community and surrounding area (Haw, Hawton, Niedzwiedz, & Platt, 2013; Joiner, 1999; Rezaeian, 2012; Cox et al., 2012). Mass clusters involve a temporary increase in suicides across a whole population, close in time but not necessarily location. Mass clusters have been documented following suicides of high-profile celebrities or others who receive considerable media attention (Cox et al., 2012; Joiner, 1999).

In her literature review of the impact of media coverage on suicide, Gould provides evidence that extensive newspaper coverage of suicide is associated with a significant increase in the rate of suicide, with the magnitude of the increase proportional to the amount, duration, and prominence of media coverage (2001). Young people appear to be particularly susceptible to heightened risk brought about by certain types of media reporting of suicide (Gould, Jamieson, & Romer, 2003). A retrospective, casecontrol study of suicide clusters in young people in the United States between 1988 and 1996 (before the arrival of social media) indicated an association between certain kinds of newspaper reports about suicide and the beginning of clusters (Gould et. al., 2014). Story characteristics involving front-page placement, headlines containing the word suicide or a description of the method used, and detailed descriptions of the suicidal person appeared more often for cluster-related suicides than non-cluster suicides (Gould et al., 2014). While the mechanisms underlying suicide clusters are unclear, it has been proposed that point clusters may result from a process of “contagion,” whereby one person’s suicidal thoughts and behaviors are transmitted from one victim to another through social or interpersonal connections (Cox et al., 2012; Joiner, 1999).

According to some researchers, a suicide contagion is similar to the spread of infectious disease (Haw, Hawton, Niedzwiedz, & Platt, 2013). Just as flu is most likely to affect individuals with weakened immunity, in poor health, and in close contact with someone who is sick, suicide is more likely 5 to affect individuals with a history of mental illness, who are close friends or relatives of the person who died by suicide, and who are experiencing poor mental health (Haw, Hawton, Niedzwiedz, & Platt, 2013). Other researchers have cautioned that suicide contagion has yet to be clearly defined (Joiner, 1999). The suicide clusters discussed in this report are point clusters that occurred in two tightly knit and geographically isolated communities. The affected Alaskan villages are not on the road system and are accessible only by small plane, which forces a higher level of self- and communal reliance. Most individuals are related through blood or marriage. In the case of the Alaska community, extended family and relations live in nearby villages that essentially function as a single community. Thus, when a suicide occurs in one village, it immediately impacts residents in neighboring communities.