This report gives an overview of suicide prevention strategies used in Alaska. It provides background information on the suicide epidemic within the state and explores the effectiveness of recent suicide prevention efforts. It also highlights data on suicide rates among American Indians and Alaskan Natives. 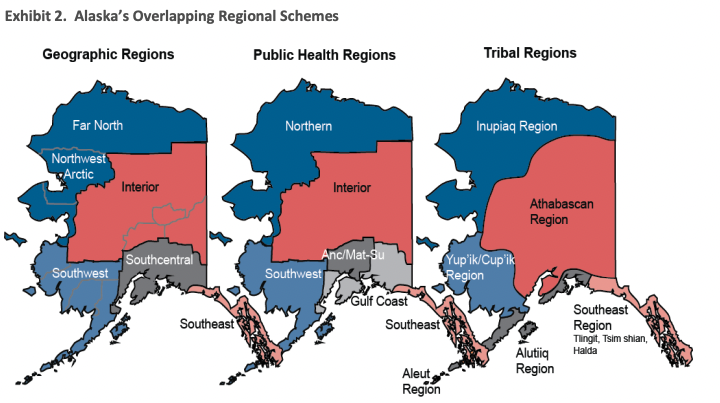 Because of Alaska’s size and diversity (e.g., geographic, cultural, rural/urban), areas of the state are often subdivided into multiple service areas and referenced in different ways, including tribal, public health, and geographic. These and other regional schemes, which overlap borders, are useful in assessing suicide prevalence and related issues throughout Alaska—which vary within and across geographic and tribal boundaries. These subdivisions and regional demarcations also are useful in understanding relevant cultural context and the multiple prevention approaches underway throughout the state. Exhibit 2 presents an overview of several maps reflecting various ways in which Alaska is subdivided. The different regions are presented here to give context to the bounded areas described and referenced in this report. Public Health Regions, for example, are how the state demarcates different regions to present state health data (e.g., Behavioral Risk Factor Surveillance System and Youth Risk Behavior Survey data) as opposed to geographic or tribal regions.
To discuss suicide prevention in Alaska, it is important to understand the geographic isolation of Alaska as well as the cultural traditions and history that have shaped the state. As noted, Alaskan villages are small, ranging in size from 20 to 6,000 residents, with an average size of 300 residents (AI Environmental Office, 2013). The majority of Alaska’s villages are not on the road system and are accessible only via bush plane or, in Southeast Alaska, the Alaska Marine Highway, or ferry system. This separation from the road system—which, for most inhabitants of the Lower 48, provides a connection to food, shelter, and entertainment—forces a higher level of self- and communal-reliance in Alaskan villages. Among other similarities across tribes, individual, family and community roles are often determined by age, knowledge, skills, and connection to natural resources such as land and water (Burch, 2000, 2005, 2006).
Traditionally, men and boys hunt land and sea animals for food while women and girls handle the processing and preparation of food, clothing, and utensils from animals (Hensel, 1996). Village Elders— men and women who have achieved rank and status by virtue of age and wisdom—provide leadership and spiritual guidance to their community (Lewis 2008). Historically, Elders have been, and continue to be, the keepers of their communities’ oral history, which includes a vast collection of parables and insights learned over a millennium of survival in Alaska. However, age alone is not sufficient for achieving the status of Elder. Individuals are ascribed leadership roles depending on their position in the social network and whether their past performance garnered community endorsement (Wexler, 2011). Because of their prominence and collective wisdom, Elders are consulted in all community decisionmaking.