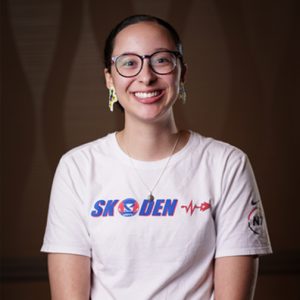 Evynn Richardson also called Ksé:hahiyé, is an enrolled member of the Haliwa-Saponi tribe of North Carolina and holds relations with the Nansemond tribe of Virginia. Evynn is the Southeastern representative for the National Unity Council Executive Committee and serves on various committees. Being an active member in her community, she has served on the Red Earth Youth Council as Vice President and has held various positions on the North Carolina Native American Youth Organization, including Co-President. Through these positions she has built many connections that have opened various opportunities for her, such as becoming an illustrator for the book, “It’s Homecoming Y’all: Nakoma’s Greatest Tradition.” This book project has allowed her to use her interest as a gateway to provide scholarships for Native Youth of North Carolina. Other projects Evynn has worked on include the Remembering Our Sisters Fellowship through the Center for Native American Youth to promote the Missing and Murdered Indigenous Women, Girls, and Two-Spirit movement through media. Being a full-time student at the University of North Carolina at Chapel Hill, she hopes to pursue her interests of non-profit management and art to give back to her community in whatever capacity she can.

It is Evynn’s hope to continue to serve Native youth, especially in the Southeastern region, to build tribal connections, engage youth involvement, and inspire positive change in the areas that she represents.