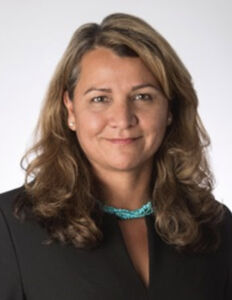 Loretta A. Tuell is the managing principle at Tuell Law. She has practiced in the arena of federal Indian law and policy in Washington, D.C. for more than 20 years. In September 2017, she relocated to southern California and established Tuell Law, P.C. Her practice focuses on American Indian law, governmental law and policy, and gaming matters.

In the private legal sector, Loretta was most recently a Partner at the international law firm, Greenberg Traurig, L.L.P. Her public service includes serving as the Majority Staff Director and Chief Counsel for the Senate Committee on Indian Affairs to Chairman, Senator Daniel K. Akaka and formerly served as Staff Counsel to Senator Daniel K. Inouye. Loretta has held several senior positions at the Department of Interior and was appointed by President Clinton to be the Director of the Office of American Indian Trust. In 2009, Loretta wasrecognized as one of five women—and the first American Indian woman in history—to receive the prestigious Margaret Brent Women Lawyers of Achievement Award from the American Bar Association. She is a graduate of UCLA School of Law.