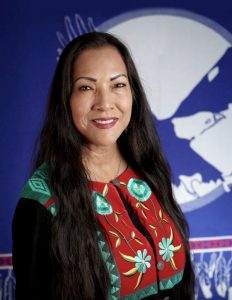 Mary Kim Titla, San Carlos Apache, has served as a Native American youth advocate for more than 30 years. She’s served as UNITY’s Executive Director since 2013 and prior to that served as a Trustee. A former TV News broadcaster, she spent most of her career working for NBC affiliate stations in Arizona. She estimates telling as many as 5,000 stories during her career receiving awards from the Associated Press, Arizona Press Club and the Native American Journalists Association. After leaving TV News, she spent nearly five years working as a Communications Officer and Administrator for the San Carlos Unified School District in the community where she was born and raised. Mary Kim has a Bachelor’s degree in Journalism from the University of Oklahoma and two Masters degrees, one in Mass Communications and another for Education Leadership and Supervision, from Arizona State University. mk.titla@unityinc.org