Rosalie Fish will be making a special appearance at the #UNITY2020 Midyear Conference! – UNITY, Inc.

Rosalie Fish will be making a special appearance at the #UNITY2020 Midyear Conference!

Rosalie Fish is an enrolled member of the Cowlitz Tribe of southwest Washington. She started running when she was a student at a public middle school in south Seattle.

She liked staying in shape, hanging out with her friends, improving her times.

Then, in 2015, she transferred to the Muckleshoot Tribal School, on a reservation south of Seattle. That’s when running started to take on a new meaning.

When Rosalie signed up for the Muckleshoot Tribal School high school track team, “They told me, ‘Oh, well, you know, track is a little spotty in attendance,’ ” Rosalie recalls. “And I said, ‘OK. That doesn’t affect me.’ “

So Rosalie went to the first practice.

“And everybody else was field events — mainly throwers, shot putters,” she says.

Rosalie realized she was going to have to do her workouts on her own.

“Being a female Native runner is kind of isolating,” Rosalie says. “It was a normal feeling to be alone.”

When Muckleshoot went to meets, Rosalie would be her school’s only runner. She says, more than once, she wasn’t invited to meets even though she’d run the qualifying times.

Once, she called to ask why.

“They asked me if I even had a uniform,” she recalls. “I guess I was just really naive to the type of racism and prejudice that comes in through sports because I’m white-passing. So I never really experienced that firsthand like I did with having ‘Muckleshoot Tribal School’ on my uniform.”

The Racism And Discrimination

In the winter, between cross country and track, Rosalie played for the girls’ basketball team and cheered for the boys’.

After one of her games, she walked into the school’s bathroom and found graffiti on the wall.

It said, ” ‘Indian savages,’ ‘Indian drunks,’ ‘live off the government’ — all over our bathroom walls,” Rosalie recalls.

The Muckleshoot Tribal School is a K–12 school, and there were lots of little kids at the game that night, hanging out with their friends or watching their older siblings play.

“I think I felt more let down than anything,” Rosalie says. “Almost, like, disappointment — like, ‘This is still something that I have to fight. I can’t believe that this is the way that people still perceive us’ — and maybe sad in the fact that this is something that my younger siblings are going to have to challenge, that these are some things that all of the middle school and elementary schoolers at tribal school are going to have to face.”

Rosalie has two younger brothers and two younger sisters, and she feels protective of them — along with all the other kids at the Muckleshoot Tribal School.

“It was traumatizing for some kids to know that there’s people who come to the games at the school who think a certain way about them, and they don’t even know us,” Rosalie says. “And for me that’s why running and being successful became that much more important to me — to show these kids that they’re wrong about us.

“Then I started doing harder workouts. I started making sure that I was running at least six times a week, if not seven.”

Rosalie switched up her diet and even stopped hanging out with some friends who encouraged her to skip practices.

She says it wasn’t always easy: She had internalized some of the discrimination she had experienced.

“At times it really can feel like, ‘This is what you’re set up to do; there’s no exceeding that,’ ” Rosalie says. “And my coach would tell me that I’m going to hit this time, and then I would say, ‘I don’t know. I don’t think you’re right. I’m gonna set my own bar that’s lower and safer.’

“And I’d run the race and I would hit their expectations. So I was literally proving myself wrong. And that was when I started to get a little bit more confident in myself.”

But Rosalie was still her school’s only runner.

“Waking up on Saturday mornings and going to the school and putting on my watch, and it’s 87 or, you know, 90 degrees out,” Rosalie recalls, “and I’m thinking, ‘Man, like, I don’t want to do this.’ But behind that comes the sense of, like, I have people that are counting on me.

Rosalie’s junior year of high school, she was Washington state champion in the two-mile.

So Rosalie felt like she was doing well: running well, being a good role model.

But, while she felt strong on the track and in her school, there was another area in which she felt completely powerless.

Her body was found more than a year later, wedged under a tree on an island in a creek. The FBI lists the cause of death as inconclusive.

And Rosalie’s aunt wasn’t the only member of her community to disappear or die under suspicious circumstances.

“I grew up seeing lots of missing poster signs of Native girls and Native women — or just stories of Native women being murdered,” Rosalie says. “And then it wasn’t until people started talking about it kind of online and in Indian Country Today and these kinds of platforms where I would see ‘missing and murdered Indigenous women epidemic.’ “

In the U.S., murder is the third-leading cause of death among Native women. And in Canada, Native women are four times as likely to be murdered as non-Native women.

Over the past couple of years, activists have started drawing attention to the problem.

Then, in April 2019, Rosalie learned about Jordan Marie Daniel. 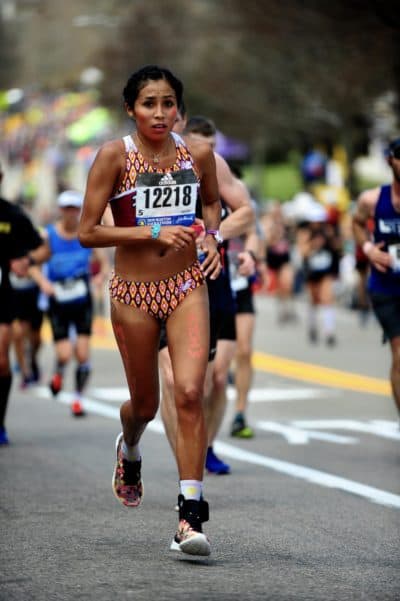 Jordan ran the Boston Marathon with a red handprint over her mouth to symbolize the women who had been silenced by violence and with “MMIW” (Missing and Murdered Indigenous Women) painted down her leg.

She dedicated each mile of her race to a different missing woman — 26 women in all.

“And it made me realize that I actually can do something,” Rosalie says.

Rosalie had qualified for the state track meet in four events: the 400, the 800, the mile, and the two-mile — and she thought she had a good chance of winning some of those and placing in others.

“And then I thought, ‘Well, what can I do? I’m going to have this platform at state championships. So what am I going to do?’ ” Rosalie recalls.

“Because the idea wasn’t mine,” Rosalie says. “So I asked her permission.”

“And I said, ‘Of course,’ ” Jordan recalls. “I felt very inspired that she was inspired by me.”

“And I was super star struck when she responded,” Rosalie says. “I was freaking out.”

“From the very first texts, I called her ‘mitȟáŋkala,’ which means ‘little sister.’ And in her language, she calls me ‘big sister,’ ” Jordan says. “And I told her to call me or text me anytime — it didn’t matter day or night. If she needs someone to talk about this with, I could help her. If she needed someone to vent to after her races, that I was there for her.”

“She was really supportive,” Rosalie says, “and she gave me some tips and helped me sort out my emotions and how I was going to go about running for missing and murdered Indigenous women at my state meet.”

Rosalie decided to paint a red handprint over her mouth and run each of her races for a different missing or murdered woman from her reservation.

On the first day, Rosalie ran the mile for her aunt Alice Looney, the one who had disappeared when she was 3 years old. She won the race.

“That whole event — state championships — felt so insignificant to the issue I was representing. I didn’t feel like celebrating. I didn’t — I couldn’t celebrate, and I had run a slower time than I anticipated because everything felt so heavy. And so I went and I messaged Jordan that night and I asked her, ‘What’s going on?’ Like, ‘Is this normal?’ “

After running Boston for 26 women, she’d run a 17-mile trail race for 17 different women and a half marathon for another group of 13 women.

“I didn’t expect the emotional and mental toll that it was going to have, and it got so bad to the point where I had to stop racing,” Jordan says. “I had to stop and try and take care of myself and understand how I’m feeling and the anxiety that it was causing and, you know, the depression that came with it.

So, when Rosalie called, Jordan told her, “Just feel these feelings. Feel it out,” Jordan recalls. “Don’t try and ignore them. Don’t try and justify them. Just know that you honored missing and murdered Indigenous women the best way you could.

“She reminded me that I was strong and that I could do it,” Rosalie says. “It definitely changed my entire perspective on why I was running. When I went into the first race, I was still in this idea that ‘I want to get three or four gold medals.’ And, after I spoke to Jordan, it was, ‘How can I run this race in a way that makes sure that I still have energy for the race a few hours away so that I can represent each of these women with integrity and with strength?’ “

During the next two races, “I absolutely still felt heavy when I ran, but I felt more prepared,” Rosalie says.

Rosalie took first in both the 800 and the two-mile.

‘You’re Running For More Than This Medal’

The 400 was already a little outside her comfort zone; she had raced it as a workout during a meet early in the season, and she unexpectedly ran a state qualifying time.

Before the race, Rosalie’s coach came to talk to her.

Rosalie ran a personal best. She came in second place. She says she was satisfied with that.

She still plans to run for missing and murdered Indigenous women, and she’s still close to Jordan Marie Daniel.

As for Jordan, she says, “I plan on doing this until I feel like I don’t have to anymore.”

We first learned about Rosalie’s story in a Seattle Times piece by Dave Trimmer.