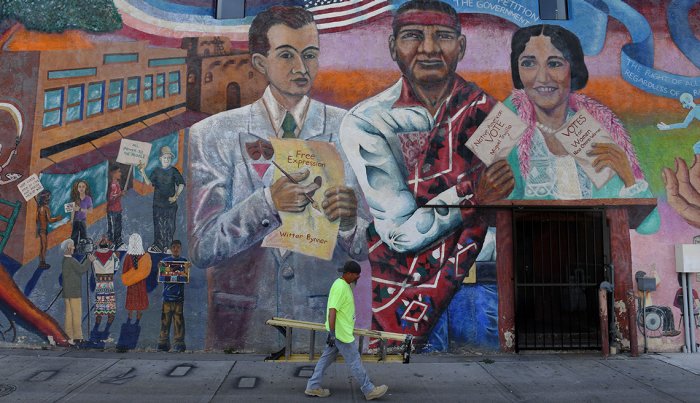 Read more on AARP En español | The Rev. David Wilson remembers as if it was yesterday the moment when he realized the importance of the Native American vote. A speaker at a seminar he attended long ago said she had asked an Oklahoma legislator, “Why don’t you come campaign among my people in my community?” The legislator’s response: “You people don’t vote.”

Wilson, a Choctaw Nation member, took that message to heart. Now, as director of the Oklahoma Indian Missionary Conference of the United Methodist Church in Oklahoma City, he is promoting the Rock the Native Vote 2020 campaign in his state, registering new voters and educating them.

Yet major hurdles to casting ballots continue to face many of the estimated 4.7 million voting age American Indians and Alaska Natives. Only 66 percent of eligible Native Americans are registered to vote, according to a landmark 2020 report from the Native American Rights Fund. Some live in isolated areas, with badly maintained roads, which can hamper postal delivery, including getting and mailing back absentee ballots, as well as voting in person. This can be especially challenging for elders.

Getting online voting information in these communities is a challenge when an estimated 35 percent of Americans living on tribal lands lacked broadband service in 2018, compared to 8 percent of all Americans, according to a report from the U.S. General Accountability Office (GAO). It urged the Federal Communications Commission (FCC) to improve tribal access.

Many Native Americans do not have traditional street addresses, instead relying on postal boxes or geographic descriptors. That can be a problem if a state requires a residential address for voting, which North Dakota did in 2018.

But help for American Indian voters is coming to a corner of the massive Navajo Nation, which totals over 27,000 square miles in Arizona, New Mexico and Utah. It includes 50,000 unaddressed homes and businesses.

In Utah, the tech giant Google agreed to help by assigning codes to 2,500 buildings that can be used as addresses for voting. The expected result: easier voting for some residents.

A number of energized groups have launched efforts this year to register American Indian and Alaska Native voters, buoyed by predictions that they could help swing seven battleground states.

Older voters should keep in mind that the election will affect the future of Social Security and Medicare, said Larry Curley of the Navajo Nation, executive director of the National Indian Council on Aging, based in Albuquerque.

“We have over half a million, 500,000-some older Indians out there. If every one of them voted, imagine the impact that would have, not only on Indian Country, but at your state elections, and who will represent you, and who will talk on your behalf,” Curley said during an Oct. 1 online seminar sponsored by his group and AARP.

Mabel Blacksheep-Hale, a member of the Navajo Nation who lives on the Window Rock, Arizona, reservation, lost several relatives to the coronavirus. “We were hit really hard by this virus. Our numbers were rising like crazy,” she said. More than 500 residents of the Navajo Nation have died of COVID-19.

Now, as the Nov. 3 election nears, some groups have combined their voting work with urging people to sign up for the U.S. Census by the Oct. 31 deadline, since Native Americans have traditionally been undercounted.

And they’re underrepresented in government, the National Congress of American Indians reported. “There are only four Native American members of the U.S. House of Representatives, which is half of what the number would be if Native representation was proportional to the U.S. American Indian and Alaska Native populations,” the group wrote.

Native voter groups have several recommendations for American Indian and Alaska Native voters so that they can turn things around:

A new website, NativesVote2020, has detailed state-by-state voting information, as well as information about tribes in each state. It was created by three groups: IllumiNative, Native Organizers Alliance and First Peoples Worldwide.