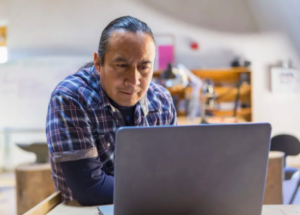 In the United States, the COVID-19 pandemic is affecting Indigenous communities to a disproportionate degree. In this Special Feature, we bring into focus some of the mental health effects and challenges that Indigenous people face as a result of the pandemic.

Since the pandemic started, it has become increasingly clear that COVID-19 affects certain communities to a disproportionate degree. Race, biological sex, age, and socioeconomic status are some of the factors that can amplify the impact of the new coronavirus.

At Medical News Today, we’ve started to examine the racialized impact of this global pandemic, and specifically the toll that it takes on more vulnerable communities in the U.S.

In this feature, we continue by focusing on how the pandemic affects Indigenous populations in the U.S. and Canada.

‘American Indians are dying of neglect’

As experts have pointed out, the COVID-19 data for Indigenous communities in the U.S. are reported inconsistently. This is partly due to racial misclassification.

Some states record data for Indigenous people with the groupings: “American Indian/Alaska Native,” “Native Hawaiian,” and “Other Pacific Islanders,” while other states lump them all together under the category “Other.”

This confusing way of reporting, together with the fact that the federal government does not collect data on all ethnicities and races equally across the country, makes it difficult to gauge with precision the impact that the pandemic is having on Indigenous communities in the U.S.

However, taking the still incomplete data concerning COVID-19 cases and deaths together with established information about social determinants of health in these communities indicates that the pandemic is hitting Indigenous people particularly hard.

For example, a frequently updated report by the nonpartisan American Public Media Research Lab found that Black Americans and Indigenous Americans are taking the brunt of the pandemic throughout the country.

The report estimates that 1 in 1,500 Black Americans have died of COVID-19, followed by 1 in 2,300 Indigenous Americans.

In some states, Indigenous populations are disproportionately affected, compared with their population share.

New Mexico is a stark example — here, Indigenous Americans make up only 8.8% of the population, but account for over 60% of deaths.

The Navajo Nation, a territory that spans parts of New Mexico, Arizona, and Utah, made international headlines for having the highest infection rates per capita, compared with any U.S. state.

Furthermore, a report from the Kaiser Family Foundation warned that American Indian or Alaska Native adults have the highest risk of developing severe illness if they contract the new coronavirus, compared with all other racial and ethnic groups.

Specifically, 34% of American Indian or Alaska Native people aged 18–64 had a higher risk of severe illness, compared with 21% of white people in this age range.

In a teleconference organized by the Robert Wood Johnson Foundation (RWJF), a philanthropic public health organization in Princeton, NJ, Dr. Donald Warne, associate dean of diversity, equity, and inclusion at the University of North Dakota School of Medicine & Health Sciences, spoke about the challenges that Indigenous communities in the U.S. face.

Limited access to healthcare, overcrowded and multigenerational housing, high rates of poverty and chronic disease, and limited access to clean water and grocery stores are only some of the social determinants of physical health in these communities during the pandemic.

A lack of testing and contact-tracing facilities in these communities further amplifies these disparities. Also, traditional practices involving large social gatherings to mark special events, such as harvests or coming of age ceremonies, may contribute to the spread of the virus.

Responding to similar challenges throughout the world, the United Nations have urged member states “to include the specific needs and priorities of Indigenous peoples in addressing the global outbreak.”

In the RWJF teleconference, Dr. Warne, who is also the director of the Indians Into Medicine program at the University of North Dakota, noted that some tribes are doing better than others, depending on their access to resources. Overall, he points out, the situation is dire, due to a lack of appropriate services and funding.

“American Indians are dying of neglect, and we need non-Indian advocates to recognize that there is an Indigenous health crisis in the United States.”

Mental health impacts of the pandemic

In the context of these devastating effects of the pandemic, what are the implications for mental health among Indigenous communities?

Before answering this question, it is important to acknowledge that Indigenous populations in the U.S. had an increased risk of mental health problems before COVID-19.

According to Mental Health America (MHA), 19% of the U.S. population that identifies as Native American or Alaskan Native have reported having a mental illness in the last year. This amounts to almost 830,000 people.

Furthermore, “The suicide death rate for Native/Indigenous people in America between the ages of 15–19 is more than double that of non-Hispanic whites.” This is despite the fact that suicide rates among all ages are similar to those of white people in the country.

So, to identify the effects of COVID-19 on mental health among Indigenous communities, we should take “a step back and look at some of the upstream causes of mental health disparities,” urges Dr. Warne in the RWJF teleconference.

The mental health ‘baseline’ of racism, abuse, and marginalization

“We have a lot of historical trauma. We also have a long history, unfortunately, of forced boarding school participation,” Dr. Warne explains. “My mother is a survivor of boarding school,” he continues, “and people were abused in these schools.”

“We have entire generations of Indigenous peoples in the U.S., Canada, Australia, and other parts of the world, where boarding schools and residential schools were used to try to integrate people, get rid of the Indigenous cultures. [And unfortunately] it was done through abuse: physical abuse, mental abuse, sexual abuse […] a really horrible history.

So, eventually, those populations become parents too, and what have they learned about parenting? We have this intergenerational challenge of unresolved trauma that […] is underappreciated and underrecognized.”

The scholar goes on to cite research carried out in South Dakota, which found “statistically significant [and remarkably] greater exposure to adverse childhood experiences for American Indians” than average Americans, adding that the data from populations in other states are similar.

And this is only “where we are as a baseline,” prior to COVID-19, the researcher observes.

Dr. Warne goes on to explain that social isolation is the last thing that people in these communities need, as it is a risk factor for “bad outcomes, including suicide.” The solution he poses is “to focus on social connections, but in a safe manner, and physical distancing, not social distancing.”

“For example, [in South Dakota] they have community mental health services that see Medicaid clients. We have a lot of people on Medicaid because of poverty. And if I allowed you to guess how many of the community mental health centers were located on reservations, it would be zero, believe it or not — zero! And that’s where the greatest need is.”

Mental health resources would be especially useful now, as many Indigenous people who would ordinarily benefit from participating in communal practices and social gatherings can no longer attend them.

For example, large traditional gatherings among tribes in the Great Plains region have been canceled, after the source of the Navajo Nation outbreak was traced to a similar event.

While the U.S. still lacks conclusive data indicating the full effect of COVID-19 on the mental health of Indigenous communities, we can turn to data from Canada for additional insight.

In Canada, as in the U.S., long-standing mental health disparities among Indigenous and non-Indigenous populations stem from intergenerational effects of forced residential schooling, forced relocation, and the systematic removal of children from their families.

These disparities have only been worsened by the pandemic: Canada has seen a rise in what was already a suicide crisis among First Nations communities and particularly among young people.

Waterhen Lake First Nation councilor Dustin Ross Fiddler has attributed the spike in youth suicides to the lockdown and the closing of mental health services.

“This weighs heavily on our people. […] We went from having full programming for our youth and adults to all of that needing to be stopped so abruptly and immediately. I know there were a lot of young people who lost a lot of hope.”

The mental health of adults has also suffered due to lockdown measures. According to a recent survey by Statistics Canada, 60% of Indigenous respondents said that their mental health has become “somewhat worse” or “much worse” since measures of physical distancing were introduced.

Prof. Christopher Mushquash, a psychologist and the Canada research chair in Indigenous mental health and addiction at the Canadian Institutes
of Health Research, commented on the findings.

Echoing Dr. Warne’s sentiment, Prof. Mushquash explains that trauma experienced as a result of colonization and more contemporary policies has been passed down throughout generations.

“If you think about the history of colonial impositions on Indigenous communities ⁠— from assimilation policies that have disrupted families, communities, [and] traditions and disrupted cultural practices ⁠— this has really led to an intergenerational transmission of difficulties. […] The pandemic really makes clear just how big some of the gaps are and, indeed, where they are.”

Prof. Roderick McCormick, a research chair at Thompson Rivers University, in Kamloops, BC, told GlobalNews Canada that the lack of face-to-face contact and mental health support is amplifying the harms of the pandemic.

“There’s a disconnection, and [for a lot of people], that’s going to be the main stressor,” Prof. McCormick explained. He continued, “We [Indigenous people] prefer to communicate in person,” although, he noted, some people use video or social media platforms.

Prof. McCormick — who is a member of the Kanyen’kehà:ka (Mohawk) Nation — also made the point that people who provide mental healthcare to Indigenous communities should be Indigenous themselves. “They will also know what some of the more naturally occurring resources are, like support groups and people in the community who are good to talk to, like elders,” he said.

The researcher also highlighted an important association regarding the deep roots of historical trauma among Indigenous communities. Referring to the smallpox epidemic and other outbreaks of viral infection brought to First Nations people by European settlers, Prof. McCormick said:

“Now, Indigenous people are being triggered by the pandemic. Historically, there’s still that fear of epidemics.”

Amid the turmoil, Indigenous leaders in the U.S. are offering guidance.

For instance, a few weeks ago, Navajo Nation Vice President Myron Lizer asked people to “Please stay connected with relatives and neighbors by phone or video chat and remind them that they have support.”

“If you are feeling stress or anxious, take the time to take a deep breath, stretch, or pray,” Vice President Lizer advised. “Exercise by working out or by doing household chores and avoid unhealthy foods and drinks. We must protect ourselves and others.”

Glorinda Segay, a healthcare provider at the Navajo Department of Health, spoke of the importance of self-forgiveness and self-love during this crisis.

“People need to consider being more gentle with themselves through reassurance and prayers and forgive themselves for making mistakes while adjusting to the new norm.”

Initiatives such as the Power Hour — a diverse collection of presentations, including comedy, workshops, and storytelling, from the Native Wellness Institute, in Gresham, Oregon — are also aimed at supporting Indigenous communities during these trying times.

The Centers for Disease Control and Prevention (CDC) also offer resources for American Indian and Alaska Native communities, including guidance on funeral and burial services, safe watering points, and advice about physical distancing and coping with lockdowns.

As the CDC mention, anyone who needs help with stress or anxiety can contact the Disaster Distress Helpline at 1-800-985-5990, as well as a local counselor or social worker, if possible.

The newspaper also shares many other useful mental health resources, such as the:

Finally, the Navajo Department of Health have a COVID-19 hub that offers guidance for preventing the virus from spreading and provides mental wellness resources.